Rajnish is a plant photobiologist. See the publications list for details on research described below.

i-Cultiver Research: Founded by Rajnish in 2015, i-Cultiver is a consortium of interdisciplinary specialists from major academic institutions and industry. i-Cultiver is known for conducting high-end research for the agriculture and food industries, and for transfer of new technologies from research institutions to field applications. Majority of the projects include field and greenhouse trials with specialty crops to increase plant performance and yield. Particular focus is on healthy soil and plant microbiomes, nutrient assimilation, biotic and abiotic stress tolerance.

CLASlite is a software developed by Prof. Greg Asner to make forest monitoring with satellite imagery accessible to anyone interested in remote sensing and earth observational technologies. i-Cultiver is collaborating with Dr. Asner to provide this technology to its current users and to expand its application further. 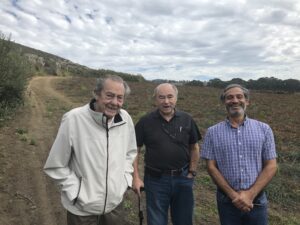 Research with Prof. Emeritus Winslow Briggs (1928-2019): With Prof. Briggs, Rajnish worked on light-regulated bacterium for its remarkable potential in agriculture. This work is continuing in a collaboration with Prof. Roberto Bogomolni and Prof. Zhiyong Wang. As Winslow would say, “stay tuned!”

Research in Industry: At Mendel Biotechnology, Inc., Rajnish served as a Lead Advocate to investigate the molecular method-of-action of an Arabidopsis protein that was identified to increase yield from field-grown soybeans. Called BBX32, this protein was classified in a new naming scheme along with other Arabidopsis B-box family of proteins. BBX32 was found to suppress the activity of the bZIP transcription factor HY5, thereby acting as a negative regulator of photomorphogenesis. These studies were repeated in soybean, leading to a better understanding of the possible mechanisms involved in the first known case of an intrinsic plant-gene-mediated yield enhancement in a row crop.

Prior to working with Prof. Peter H. Quail, Rajnish worked (for one year) with Prof. Berl R. Oakley, attempting to isolate γ-Tubulin from Arabidopsis plants using immunoprecipitation at the Department of Molecular Genetics, The Ohio State University.